We recently found out we are expecting baby number 3! We are so excited! Last year we had a miscarriage that left our family pretty sad. We have been trying since then and finally… with a little luck we can grow our family a little bigger. Ciara and Caleb are slowly understanding whats going on. Caleb really wants a little brother.

I went to the doctor for the first time on October 1 and we saw the same doctor that delivered Ciara, Dr. Bean. We (including the doctor) thought we were about 11 weeks along but after the ultrasound the baby is the size of an 8 week baby so right now our due date is May 8, 2012. We have to go back in two weeks to confirm that date. little early and my water broke with all of them. So… we are talking about me taking progesterone shot every week a little later on in the pregnancy to keep the baby in the oven a little longer. We dont have to but we need to discuss it. Since my water broke with both my babies he said the chance it will happen again is very high. After my water broke with Ciara she came about an hour later. So we will also need to worry about speeding to the hospital whenever the moment happens. Its still pretty surreal for me. 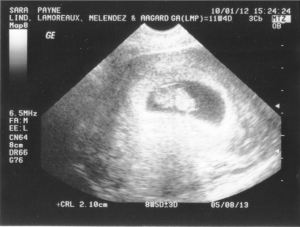 I have been watching the dates pretty close since we
Also, the doctor noticed that both my babies came ahave been trying to get pregnant. Ben has been working really really hard and very long hours. The week I found out he was actually staying the night at work (not sleeping but working through the night) so I hadnt seen him in a while.
The kids and I went to the store that afternoon and I had picked up a test. I couldnt wait so I took it right away. Sure enough it was positive. I started freaking out at first but I wanted to tell Ben first before I told the kids. But I couldnt just say nothing to I called my girlfriend and told her outside so the kids couldnt hear. Caleb knew something was up. He kept asking me what. I finally told him that we are thinking about getting a pet. (Yeah… I couldnt think of anything else.) He was later a little mad at me. 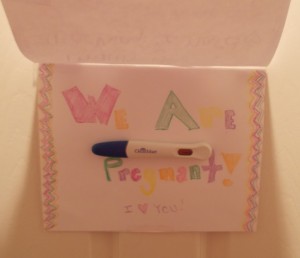 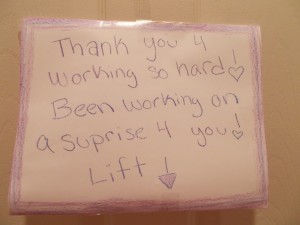 So I decided to tell Ben in a letter so that he would know when he came home and could wake me up since it would be really late before he came home. But he never saw the note. I couldnt sleep around 3 am with my husband gone and emotional like I had been. He actually texted me and was extremely discouraged himself since he had been working so hard for so long and he felt like there was still so much more to do. I told him I had something to tell him. He asked me to call him and he says once I tole him I had news he knew what it was. The tone in his voice was completely different then the tone of his text once I called him. He totally guessed it. I was actually a little mad since I never can keep a secret from Ben. So… my note was a waste. But it was fun to make and it kept my mouth shut until 3 am.
I think we are all excited for this baby. With Ciara I felt like I knew what I was getting into but felt unsure because it was Bens first little baby, and I could feel how nervous he was (he says he was all cool about it) But with this baby, as a family I think we are ready.

One thought on “Bun in the Oven”